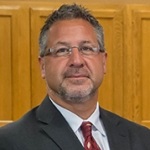 A life long resident of Hastings, Jim is an active member of the community as the former president and member of the board for the United Way of Hastings as well as a former member of the Board of Directors for Park Ridge and Augustana Care Center. He also served on the Board of Trustees for Christ’s Family Church. Jim is a multi-year winner of the Five Star Wealth Manager Award.* Jim has extensive experience in the financial management industry including life insurance and annuity products. As a financial consultant, Jim holds a Series 7, 63 and 66 License.

*Five Star Professional, a third-party research firm, identified pre-qualified award candidates based on industry data and nominations it may have received from various industry firms and individuals in the surrounding area of the candidate. Self-nominations were not accepted and candidates do not pay a fee to be considered or placed on the final list. Award candidates were evaluated against objective eligibility and evaluation criteria including, but not limited to:

1. Credentialed as an investment adviser representative. 2. Actively employed as a credentialed professional in the financial services industry for a minimum of five years. 3. Favorable regulatory and complaint history review: (1) has not been subject to a regulatory action that resulted in a license being suspended or revoked, or payment of a fine; (2) has no more than three settled or pending customer complaints filed against them (excluding dismissed complaints) with any regulatory authority or through Five Star Professional’s consumer complaint process; (3) has not individually contributed to a financial settlement of a customer complaint; (4) never filed for personal bankruptcy; (5) never been convicted of a felony. 4. Accepting new clients.

The inclusion of a candidate on the final list should be not construed as an endorsement of the candidate by Five Star or any other organization. The Five Star award is not indicative of the advisor’s future investment success and may not be representative of any one client’s experience. Further, there is no guarantee that the selected advisor will be awarded this recognition by Five Star in the future. For more information on the Five Star award and the research/selection methodology, go to www.fivestarprofessional.com.